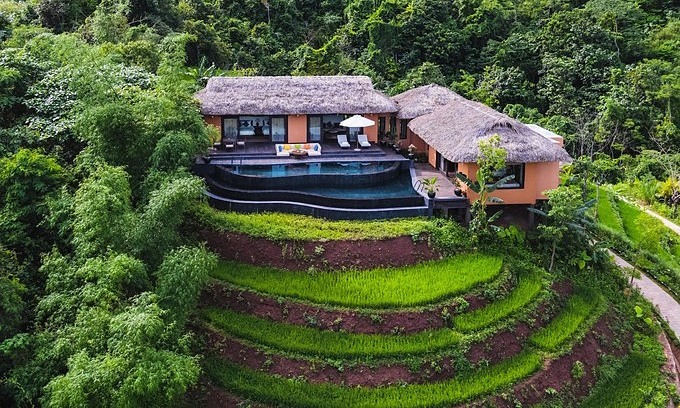 For fear of large crowds amid the new Covid wave, Hanoians are opting for resorts at remote forests for weekend escapes.

Quynh Trang, a Hanoian, said she booked a room at a resort in the suburban district of Ba Vi, about 50 kilometers west of the city center, last weekend and all rooms were full.

She contacted some other resorts in the rural district of Soc Son and Hoa Binh Province, just 80 kilometers from Hanoi but received the same answer: ‘No available rooms’ – prompting her to cancel her trip.

Trang said she had wanted to visit an isolated resort with her family for the weekend so her children could enjoy the outdoors as Hanoi suspended all entertainment and banned large crowds over new Covid fears. The resorts she prefers are in or near Hanoi and reachable by family car. In addition, most have private villas, surrounded by trees and airy space.

Khanh Quynh, saleswoman at a Hanoi-based travel company, said the demand for weekend trips in late May and early June was not too high due to the impact of the new Covid-19 outbreak, but high-class resorts in less crowded areas near Hanoi are drawing tourist interest.

A representative of Melia Ba Vi Mountain Retreat on the outskirts of Hanoi said the number of tourists booking rooms at the resort have increased sharply in the second half of last month, against the first week of May when the new wave hit northern localities.

Last week, the resort’s room capacity reached more than 60 percent. To date, the resort’s occupancy rate this month has reached 50 percent even though room rates are higher.

There are many families who book a private villa to stay for the whole week, the resort’s representative said, adding tourists tend to book rooms close to the departure date; therefore, the occupancy rate can reach 60-70 percent next month.

Just a short ride from Ba Vi National Park, a famous weekend retreat in Hanoi, the resort is surrounded by green trees and lies separately from crowded residential areas, making it ideal for those wishing to escape Covid and enjoy a weekend holiday.

Avana Retreat in Mai Chau District of Hoa Binh Province, famous for terraced rice fields, saw its occupancy rate reach 60 to 70 percent on weekdays while the figure rose to 90 percent during the weekend even though rooms cost VND5 to 20 million ($216.71-866.84) a night.

Some families book long stays, up to six nights in a row. Most tourists coming to the resort are families and couples with their own cars.

Avana Retreat is located inside a small valley in Mai Chau where many tourists say they feel safe and comfortable.

The number of visitors to nature-friendly resorts have been on the rise regardless of the impacts of the new Covid wave, showing the trend of nature tourism is still being prioritized.